WLTP
Consumption and Emissions Based on Usage
Sustainability
Eco Driving

WLTP IN A NUTSHELL The WLTP protocol will replace the previous approval procedure (NEDC) that came into force in 1992. Since September 2017, all new models marketed for the first time have been WLTP-approved. From September 2018, all vehicles sold will have to be WLTP certified. This new laboratory testing protocol will be complemented by the real-use Real Driving Emission (RDE) emission measure. New WLTP protocol will give consumers a clearer view of fuel consumption and CO emissions2 their vehicle. Thanks to smart technology choices deployed in anticipation of regulation (DIESEL and GPF gasoline SCR), our vehicles are already certified in WLTP (mandatory for all passenger vehicles from September 2018) which is closer to the actual use of customers.

The customer is at the heart of our concerns. That’s why we’ve always supported the implementation of customer-use procedures and strive to move ahead of new protocols to stay at the forefront of technology.

Proof of our transparency, we publish on our website the consumption of our models since 2016 and their NOx emissions since March 2018 in real conditions of use, according to a protocol developed with NGOs (T and E and FNE) and certified by an independent third-party organization (Bureau Veritas).

WHAT CHANGES WITH WLTP?

One of the aims of the new WLTP procedure is to ensure a better representation of the actual conditions of use of vehicles and their current technologies during registration. It sets stricter test conditions and a more dynamic driving profile than the previous NEDC cycle developed in the 1990s. Its construction was based on actual taxiing data while the NEDC was based on theoretical driving profiles.

WLTP also produces more precise values because it takes into account the specifications of each vehicle including all of its optional equipment, which can have a significant influence on fuel consumption and CO2 emissions. WLTP values are, in some cases, higher than NEDC values for the same car. This does not mean that fuel consumption performance is degraded, it is simply a new measure based on a more rigorous, longer repository, thus better reflecting the current uses of vehicles. 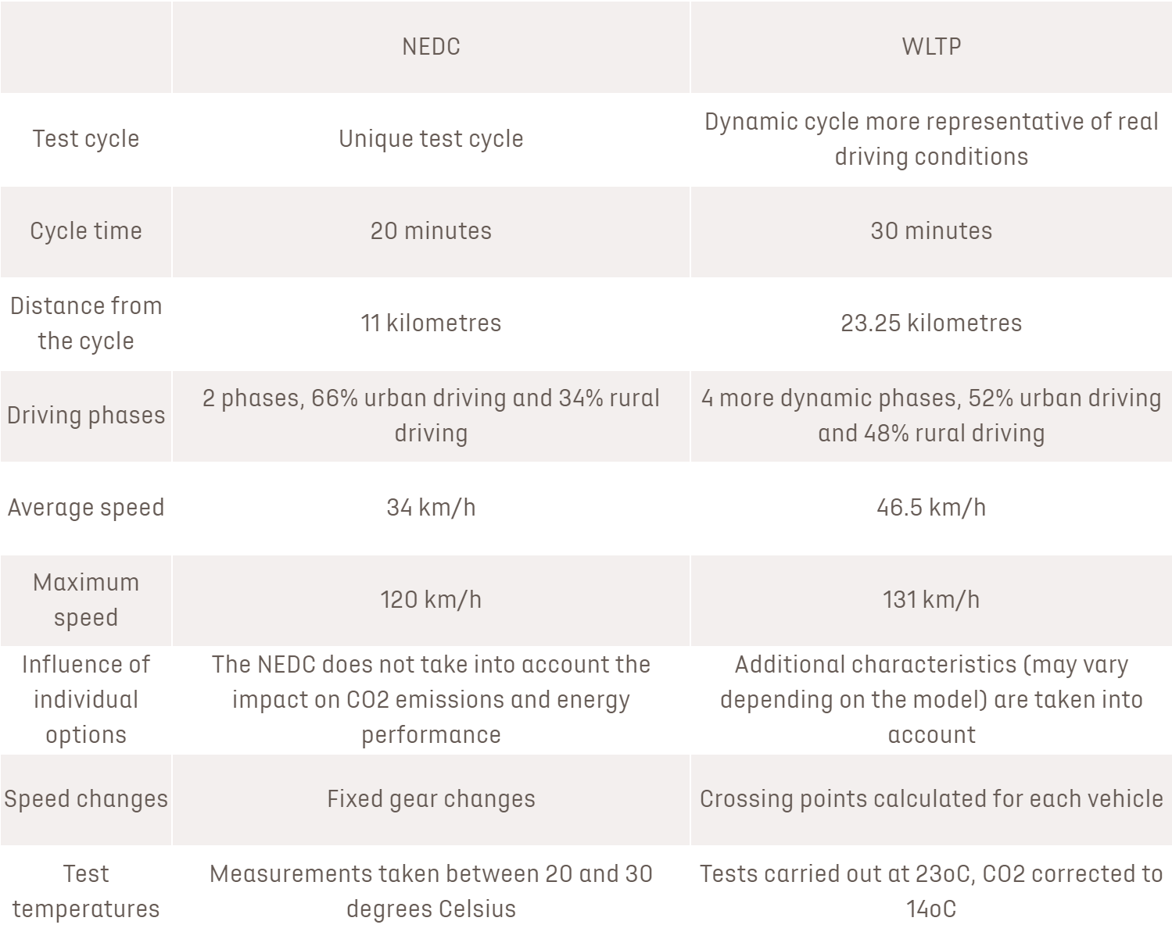 From September 2018, in addition to the WLTP certification protocol, all manufacturers will be required to measure the emissions of their real-driving models (RDE) from all vehicles sold within the EU, and in Switzerland, Turkey, Norway, Liechtenstein, Israel and Ireland.

In these RDE tests, emissions of pollutants such as nitrogen oxides (NOx) and fine particulate matter are measured on open roads for more realistic information.

WHAT DOES WLTP MEAN?

This is a new testing procedure to obtain a more realistic analysis of a vehicle’s fuel consumption and CO2 emissions. From September 2018, all vehicles registered for the first time will have to be WLTP certified. The WLTP protocol will gradually replace the old NEDC (New European Driving Cycle) procedure.

WHAT IS A WLTP DRIVING CYCLE?

A vehicle’s consumption and emissions always depend on each person’s driving style, which is why a large amount of data collected around the world has been compiled for the WLTP standard. These data were used to define four representative phases with four average speeds: low, medium, high and very high.

During each of these phases, different situations are measured (braking, acceleration, stopping) in various ways to reflect everyday driving situations. The combination of these phases provides what is known as the “driving cycle.”

WHAT DOES WLTP MEAN TO ME?

The entry into force of the WLTP protocol means that the fuel consumption and CO2 emissions shown in a vehicle’s description more accurately reflect the values emitted in a real-life driving situation.

The WLTP procedure takes into account individual options (e.g. winter tires or glass roof), allowing for more realistic values based on the exact configuration of your vehicle.

More realistic values naturally mean that vehicles with a combustion engine will have higher fuel consumption and emissions values, while electric vehicles (including plug-in hybrids) will have reduced battery life. This may also lead to an increase in the number of vehicles affected by the CO2 tax. However, WLTP-approved vehicles will remain taxed on the basis established by the NEDC. In the short term, therefore, taxation systems based on CO2 emissions will not change (CO2 tax, corporate vehicle tax (SST)).

WHAT DOES RDE MEAN?

RDE is the acronym for “Real Driving Emissions.” This is a new procedure for measuring emissions of pollutants such as nitrogen oxides (NOx) and fine particulate matter.

As their name suggests, RDEs are measured on open roads in real driving conditions, not in the laboratory. These measurements are obtained using a smart device called PEMS (Portable Emissions Measurement System) attached to the rear of the vehicle during the test.

WHAT DOES EURO 6 MEAN?

Euro 6 is the current standard that sets limits on polluting emissions. It sets maximum emissions values of fine particulate matter and nitrogen oxides below the previous euro 5 standard.

From September 2018, the Euro 6 standard enters a second stage: the euro 6.3 standard. It requires even lower limits than the previous stage in terms of fine particulate emissions for vehicles equipped with gasoline engines.

Applies to new vehicles. The new types of vehicles will be subject to the new emission standards a year earlier.

WHAT IS SELECTIVE CATALYTIC REDUCTION?

In order to further reduce the emission values of a vehicle, liquid ammonia, called AdBlue®, is added to the exhaust systems of diesel vehicles. Selective Catalytic Reduction (SCR) with AdBlue® reduces nitrogen oxides by up to 90%. Water vapour, nitrogen and CO2 remain mainly.